by Core of the Coalman 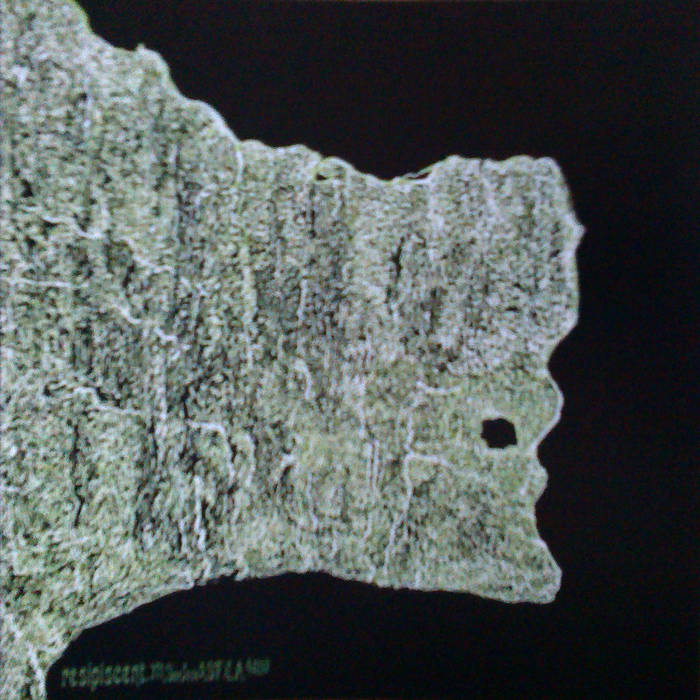 The cover here is original back rather than front cover...the front cover features a weirdly distorted drawing (the same one appearing here, on the back) and I havent been able to get it to scan or photograph clearly...later, later

One of the original reasons for starting my Core of the Coalman project, as opposed to its previous incarnation sevencentralandmountain, was to embrace a rawer way of working and sometimes darker energy. This disk, my first record on a real label (Resipiscent, San Francisco) represents what I had been working towards since I finished school in 2000, and after a visit to Japan, and a small composition residency in Long Island that some friends arranged for me. For me now, this record makes a transition from band-based projects to working in pure sound, and "noise", and also to working with the experiential, phenomenological side of sound (listening, and the experience of that). How one can capture or sculpt a sonic experience, or the possibility for that...that is something really exciting. Also, at this time I made friends with a bunch of goons in the bay area who a big influence on me, and inspired me to mold the sounds physically and sculpturally and really make them my own.

I also meant it as a kind of "fuck you" to the people around supporting what was going on in the world, profiting from it, even though it was murderous and exploitative.

Also, it bears mention before everyone forgets, that George W Bush retaliated for the Sept 11 attacks in New York by blowing up Afghanistan and then invading Iraq. Both countries had been being bombed for years anyway, and certainly the situation in Afghanistan was desperate. After joining in protests and observing the official reaction to the protests, I began to feel both very nervous and totally powerless. When George Bush invaded Iraq, the city of San Francisco was closed for several days, and slowed almost to a halt for two weeks because of protests. As a community, a statement of non-participation in this war effort was made, and this was shared by many cities and communities across the United States. Yet, the violence did not stop. The protests were largely not covered by the US media, and what coverage their was manipulated facts of numbers of people protesting. An attempt seemed to be made in the much of the mainstream media to associate the protests with random hooliganism occurring on the fringes, rather than discuss the issues. It seems clear to me now that if the Occupy movement appears to lack unity or a clear ideology it might be in part an outcome of the fact than these previous protests were carried out with a very firm and topical ideology, and this attempt to raise a pubic discussion of the issue was ignored. Perhaps an alternative is simply to demonstrate a solidarity that cannot be ignored, and try to raise the issues again afterwards. No space to discuss that here...

The rest of America put stickers of flags on everything bought duct tape and plastic in case the terrorists attacked central Iowa, there rest of America ''stood united'', but I just started to vibrate in a feedback loop of dread, down to my shoes. George W Bush ("the decider") responded to the mass protests (to the extent he or the media acknowledged them) by saying on television that he "would not be affected by special interest groups" , which is pretty ironic as he was definitely involved in a lot of under the table business dealings, as well as more obvious criminal and unethical activities, usually with with emphasis on the special interests of the few rather than the majority. A whole city, or a group of cities a special interest?

New laws were passed quickly eroding the basic individual and civil rights America claimed to be founded on, and people came to feel more and more dis-empowered. On a personal level I was filled with an anxiety towards everything, becoming very neurotic. I realized that this had always been inside of me, and I had to some how explode this out. I needed to liberate myself.

The word "liberate" was being used a lot. Meanwhile, the United States continued to "liberate" people in the middle east, usually liberating them of their homes, if not their arms, legs and children. This type of thing now happens everywhere. If we have a choice, why do we continue to chose this? Maybe we haven't a choice, or maybe we need to liberate ourselves.

Core of the Coalman UK

Experimentalist exploring spatial listening, phenomenologies of temporality, and interaction with information and instruments in everyday life and dreams. ... more

Core of the Coalman recommends:

Bandcamp Daily  your guide to the world of Bandcamp

Serena Cherry debuts her black metal project, plus a Pick from the Crypt block from Svalbard